The Grand Shrine at Ise, or Ise Jingu as it is known locally, is the most venerated Shinto Shrine in Japan. Dating back to the 3rd century, this Shrine is a large complex comprising 125 shrines. The Shrine occupies a large area in Ise city, Mie Prefecture in central Japan. The shrine attracts about 8 million visitors annually.  The locals refer to the shrine as "O-Ise san" or "Dai Jingu san". 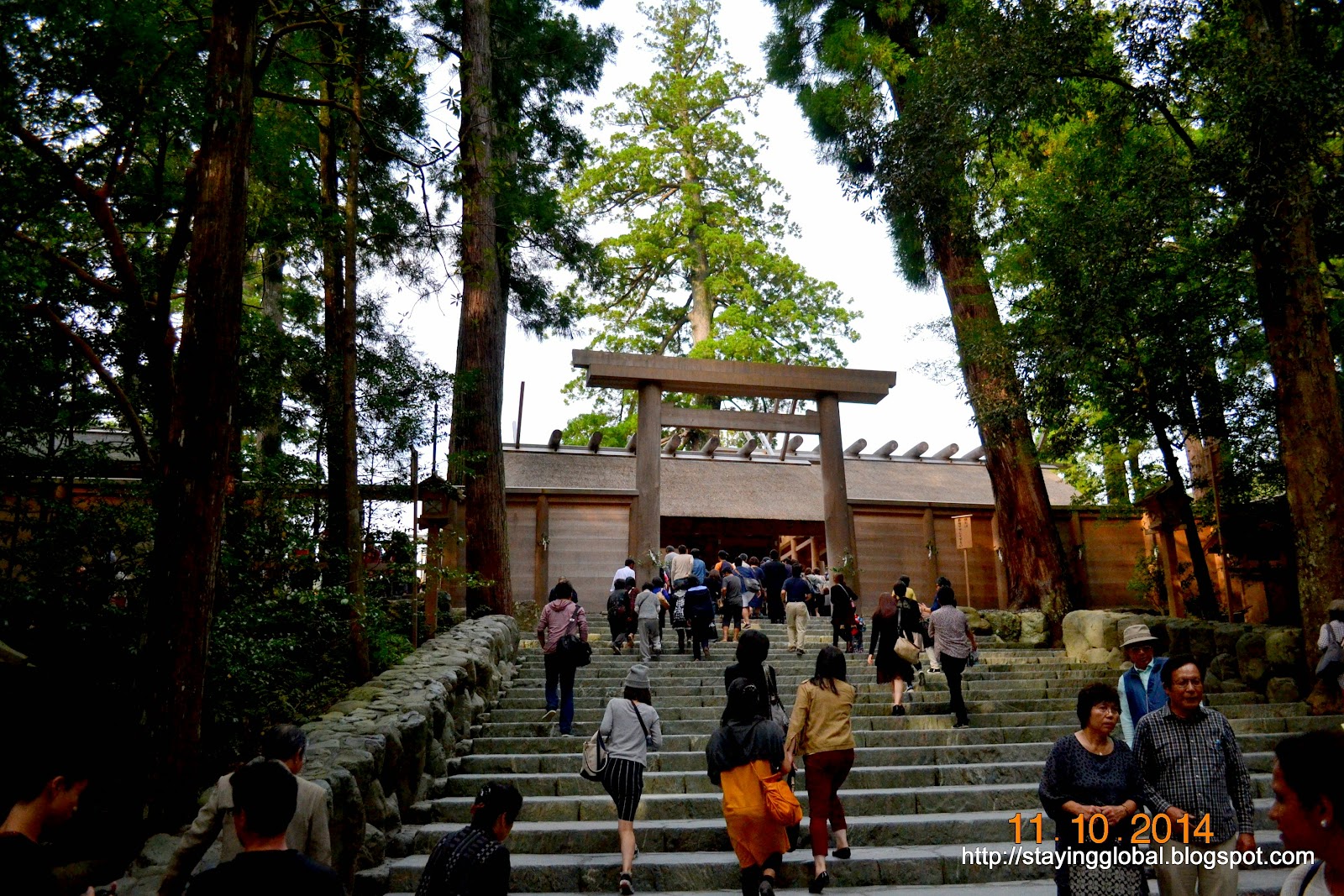 Naiku, also called the Kotai-jingu, is the Inner Shrine. The Shrine is dedicated to Shinto's most venerated deity Amaterasu Omikami, the Sun Goddess. Amaterasu is also believed to be the predecessor of the Imperial family. The Deity is also regarded as the nourisher of all life. In Nihon Shoki, the Chronicles of Japan, dating back to 720 AD, it is mentioned that Amaterasu Omikami descended from the heavens and selected Ise as the place for her enshrinement. The Naiku's main sanctuary, is referred to as the divine palace of Amaterasu Omikami. The Holy mirror, a symbol of the deity, is enshrined inside.

Geku, also called the Toyouke Dai-jingu, is dedicated to Toyouke Omikami, the provider of sacred foods and companionship to Amaterasu. The deity is also the guardian of well being and the provider of food, clothing and shelter. People pray to the deity for a good rice crop, the staple food of Japan. The deity is considered the guardian deity for any industry. Traditionally pilgrims pay their respects at the Geku before proceeding to pray at the Naiku.

The Shrine buildings are built in simple style. 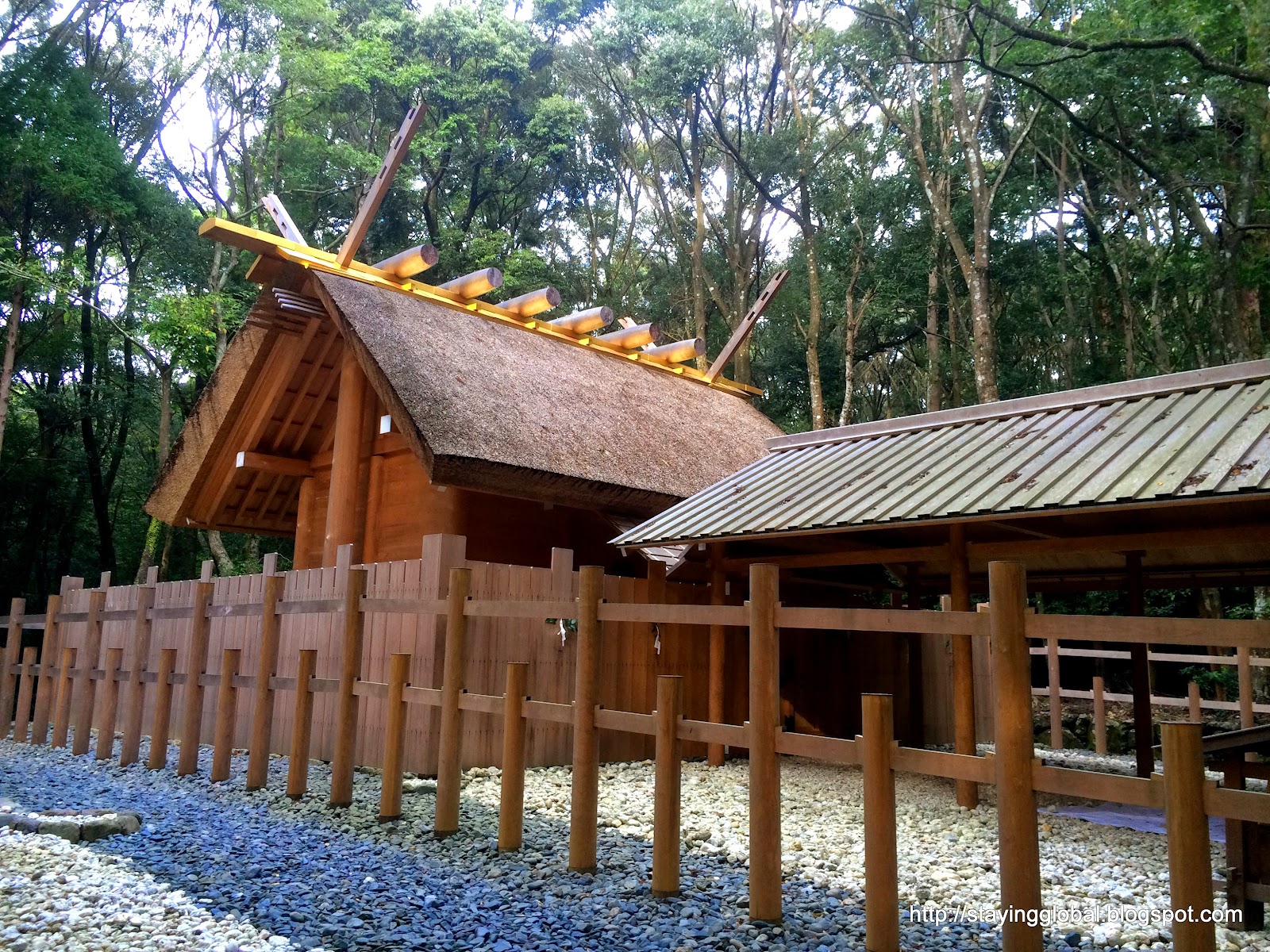 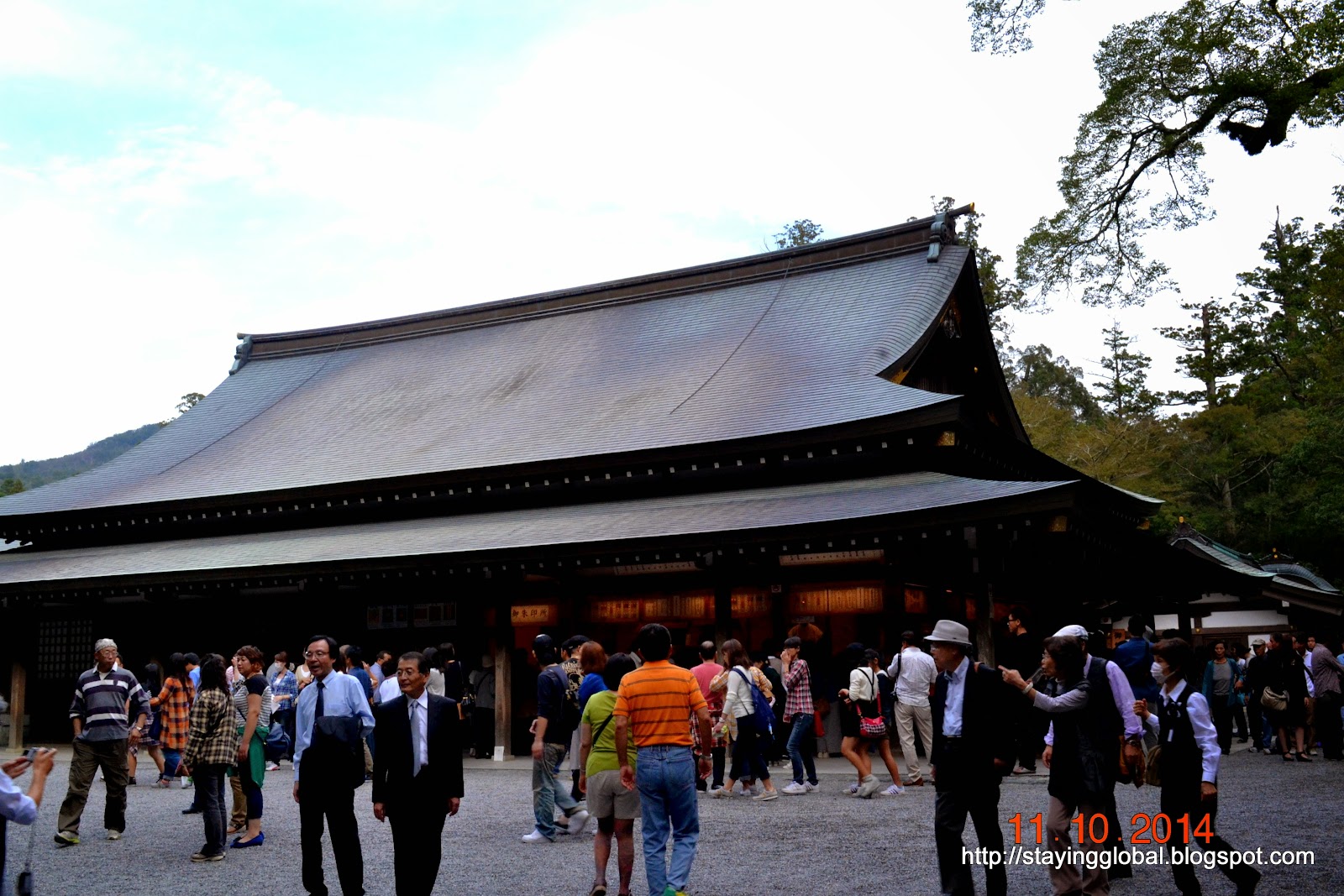 They are not ornately decorated or painted like the Shrines at Nikko. 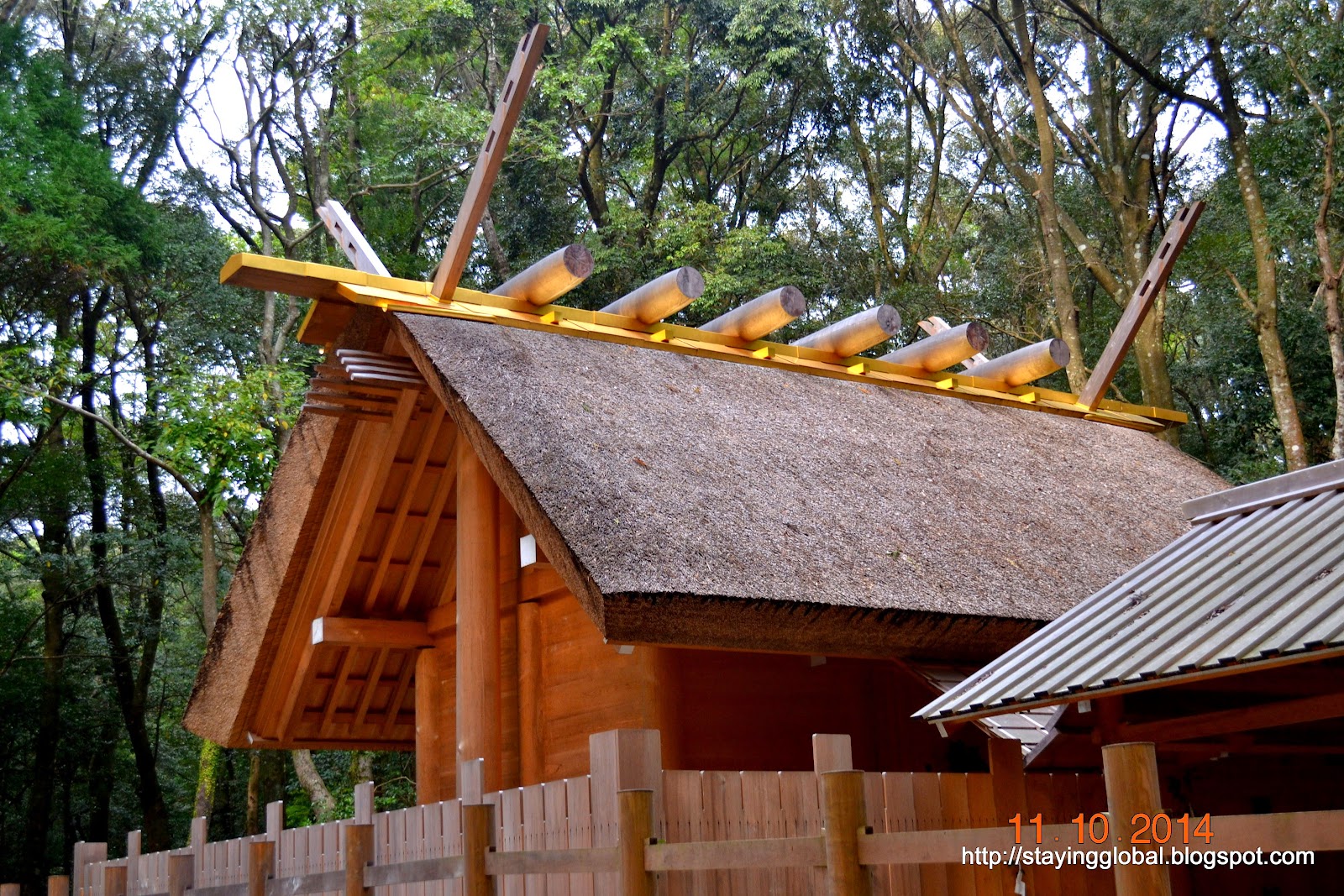 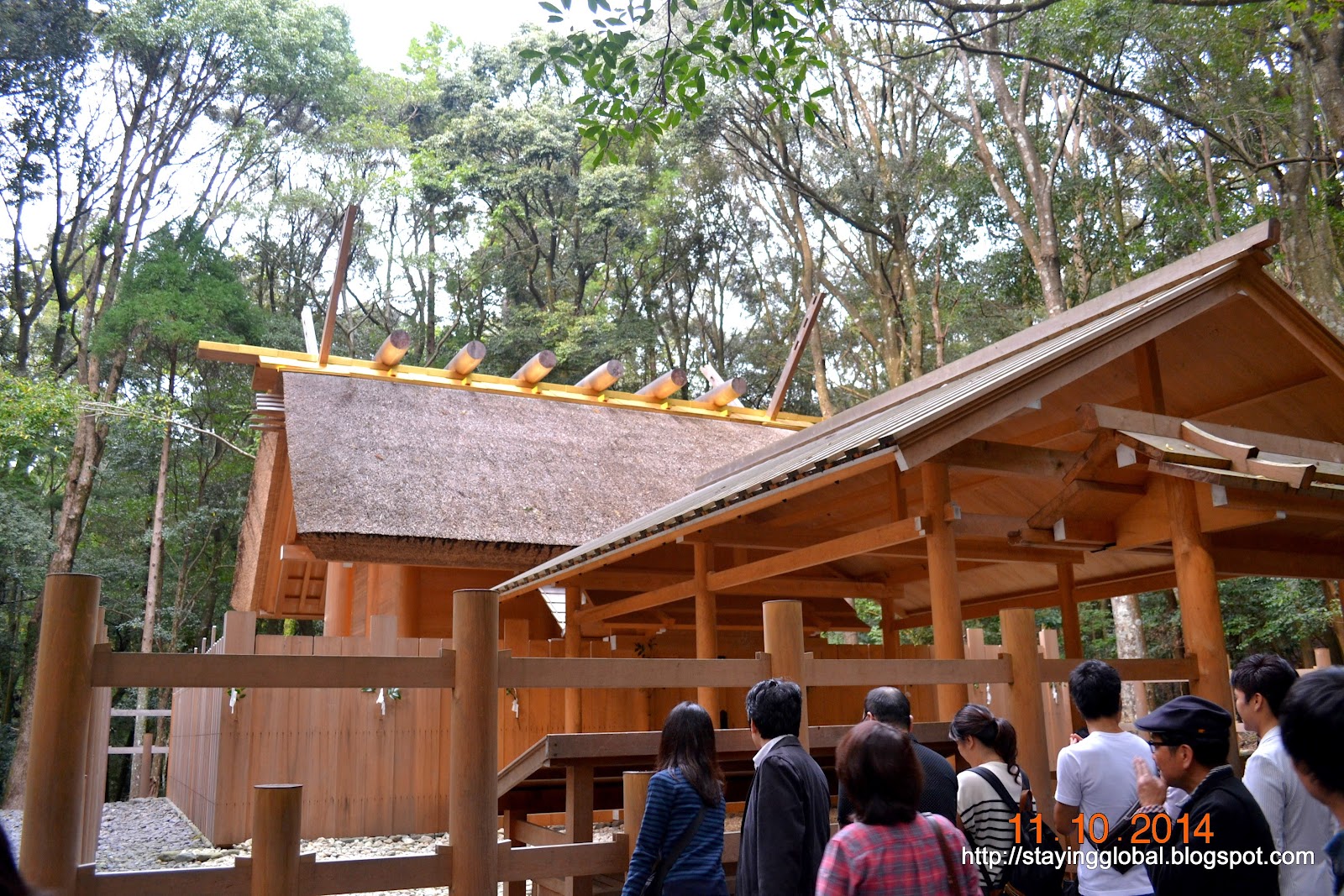 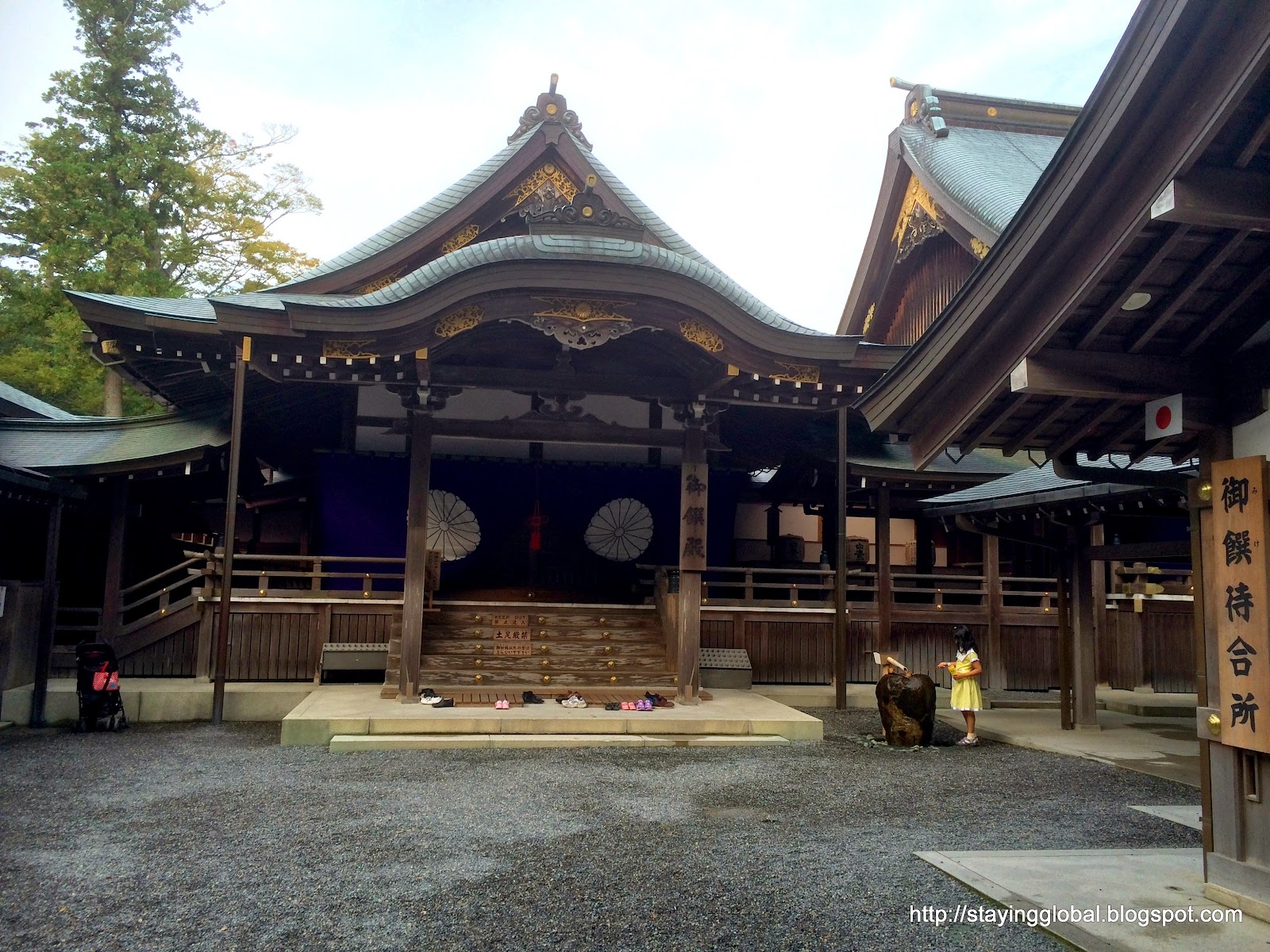 They are surrounded by green trees and visitors have to walk past tall trees to reach the shrine structures. 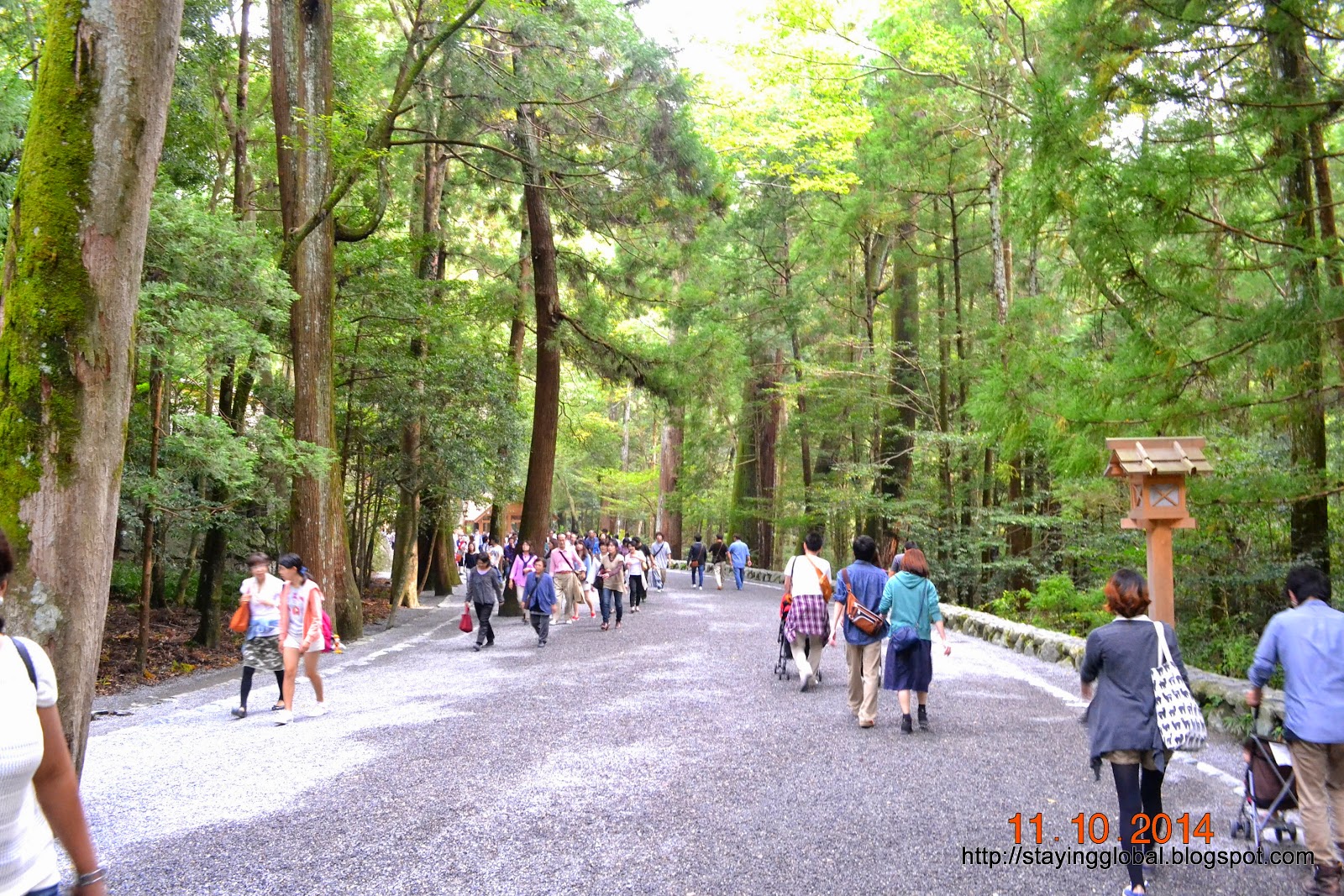 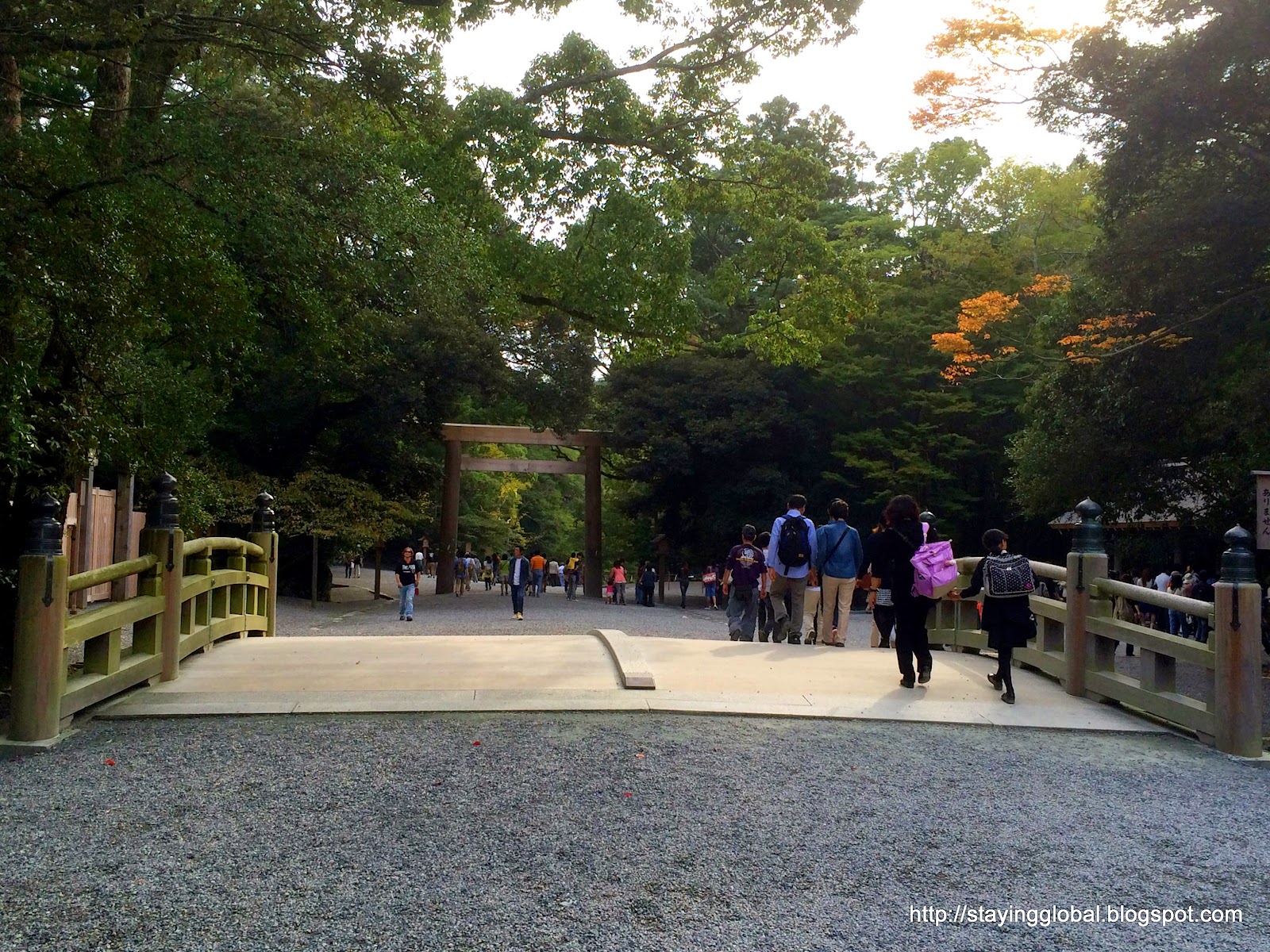 Photography is not allowed near the main shrine buildings. Most of the innermost buildings are hidden from the view and are off limits to common people. 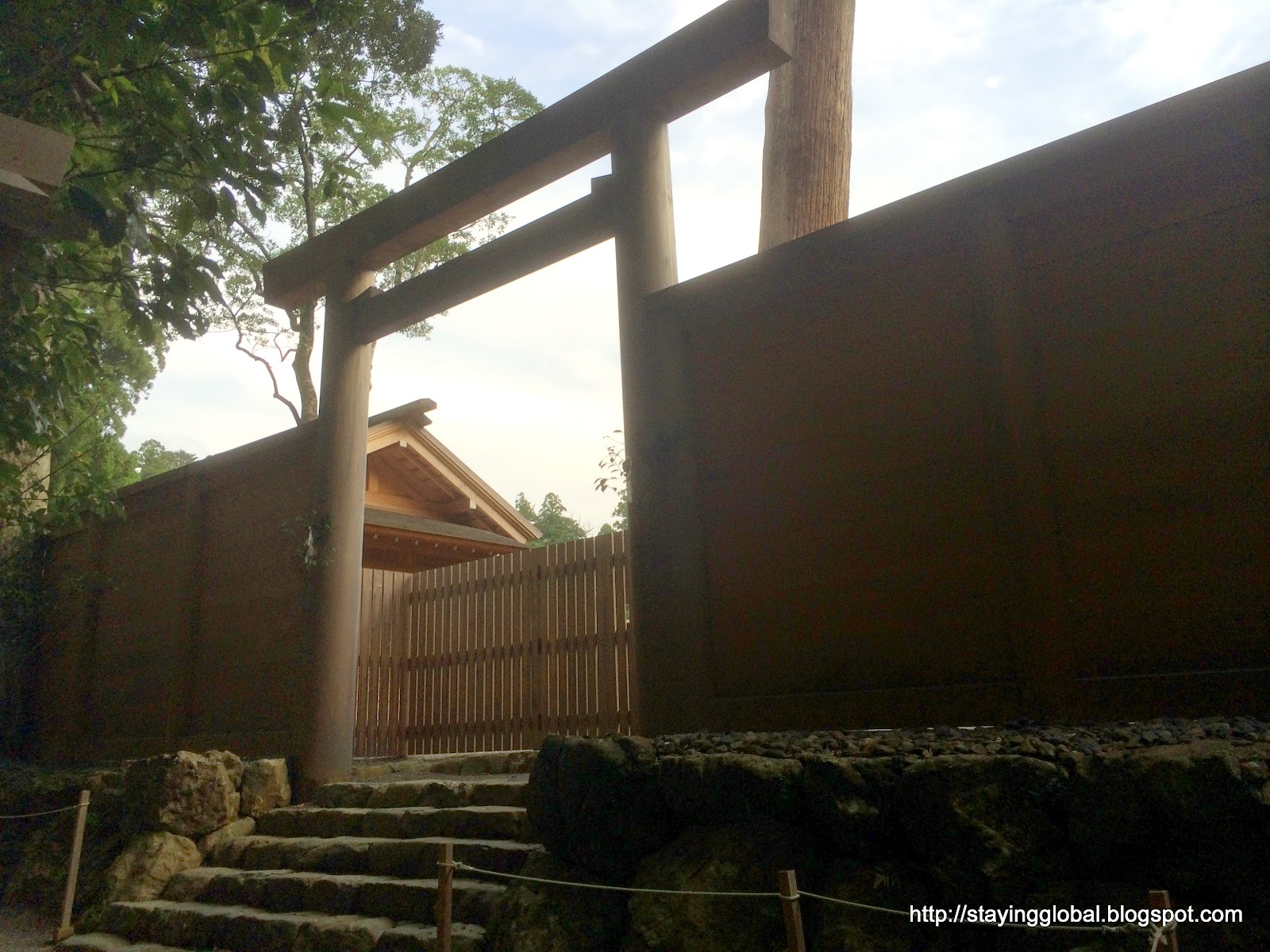 Occasionally visitors are treated to the sight of a wedding procession in the shrine complex. 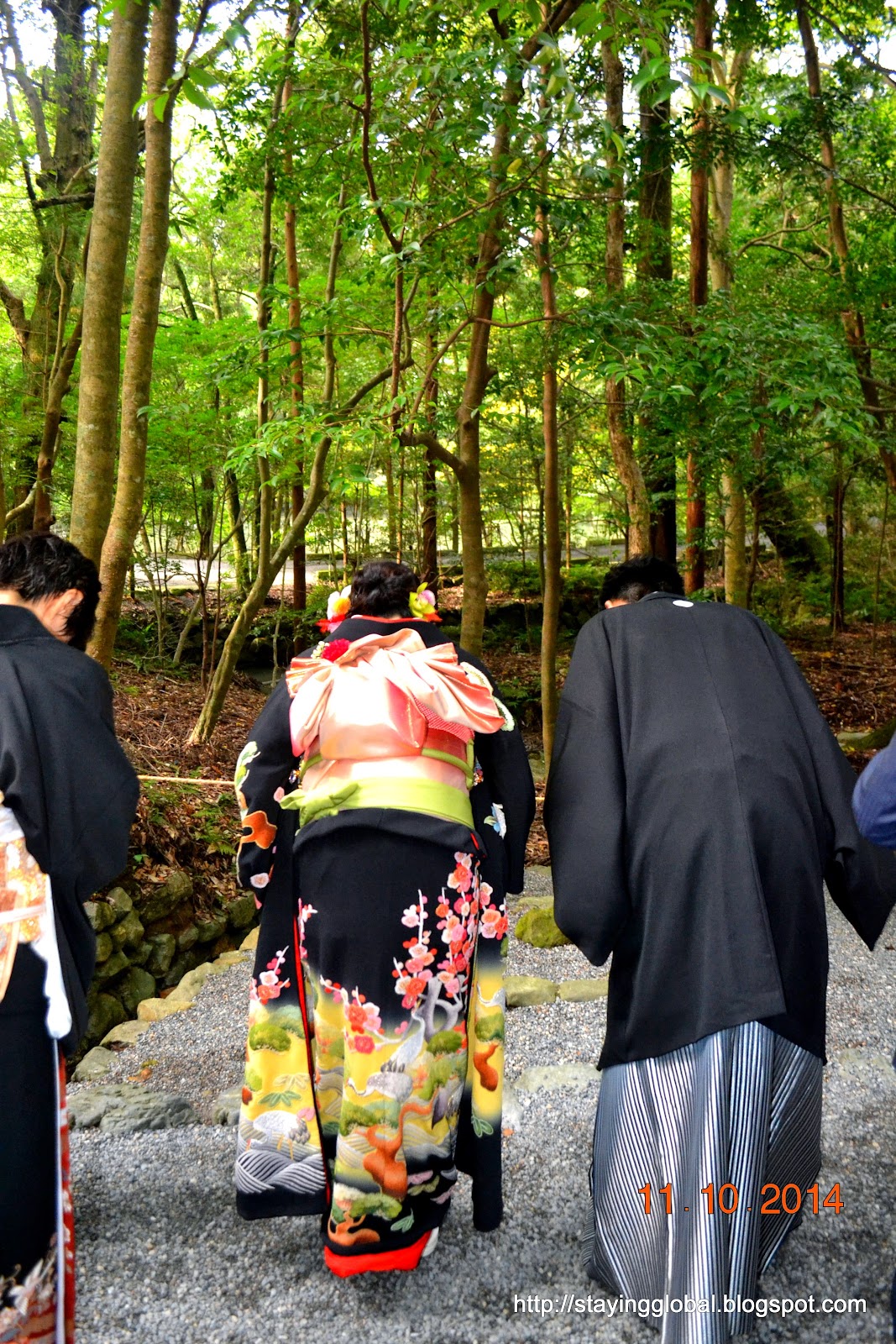 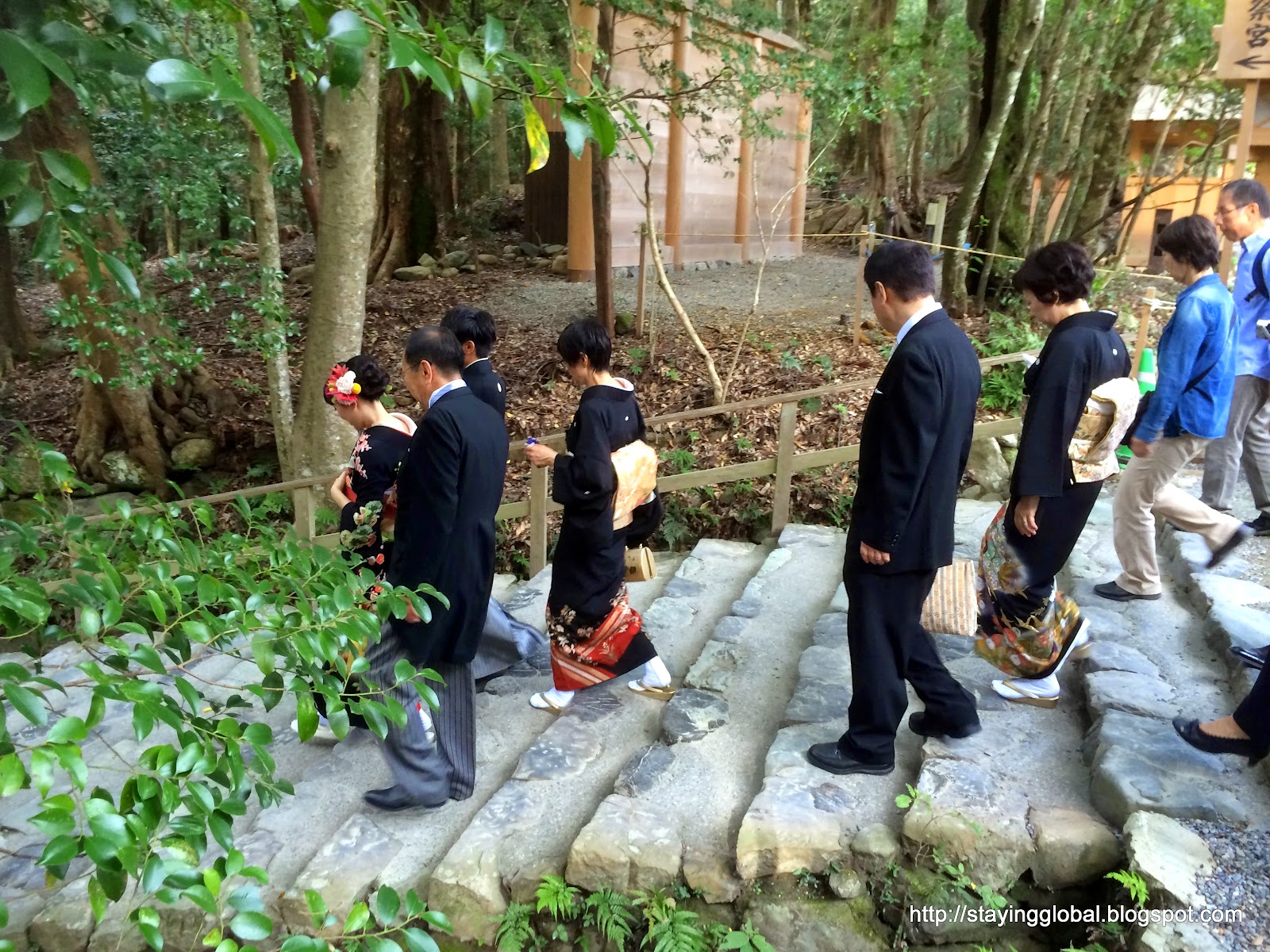 An unique tradition of the Ise Grand shrine is the Shikinen Sengu, a ceremony held every 20 years. As per an ancient tradition, some of the Shrine buildings, including the Geku and Naiku are required to be rebuilt every 20 years. The tradition is said to have been started about 1300 years ago on the orders of the Emperor Tenmu. The shrine buildings are reconstructed on adjacent sites according to ancient construction styles. The Uji Bridge at the entrance to the Naiku is also reconstructed. Ceremonies and preparations for the rebuilding commence few years earlier. The ceremonies for the 2013 Shikinen Sengu commenced as early as 2005.  Upon completion of the new buildings, the god of the shrine is ritually transferred to the new home in a ceremony called Sengo No Gi. The old shrine building is then deconstructed and the wood from the old shrines are sent to other Shinto Shrines around Japan for use in rebuilding their structures. 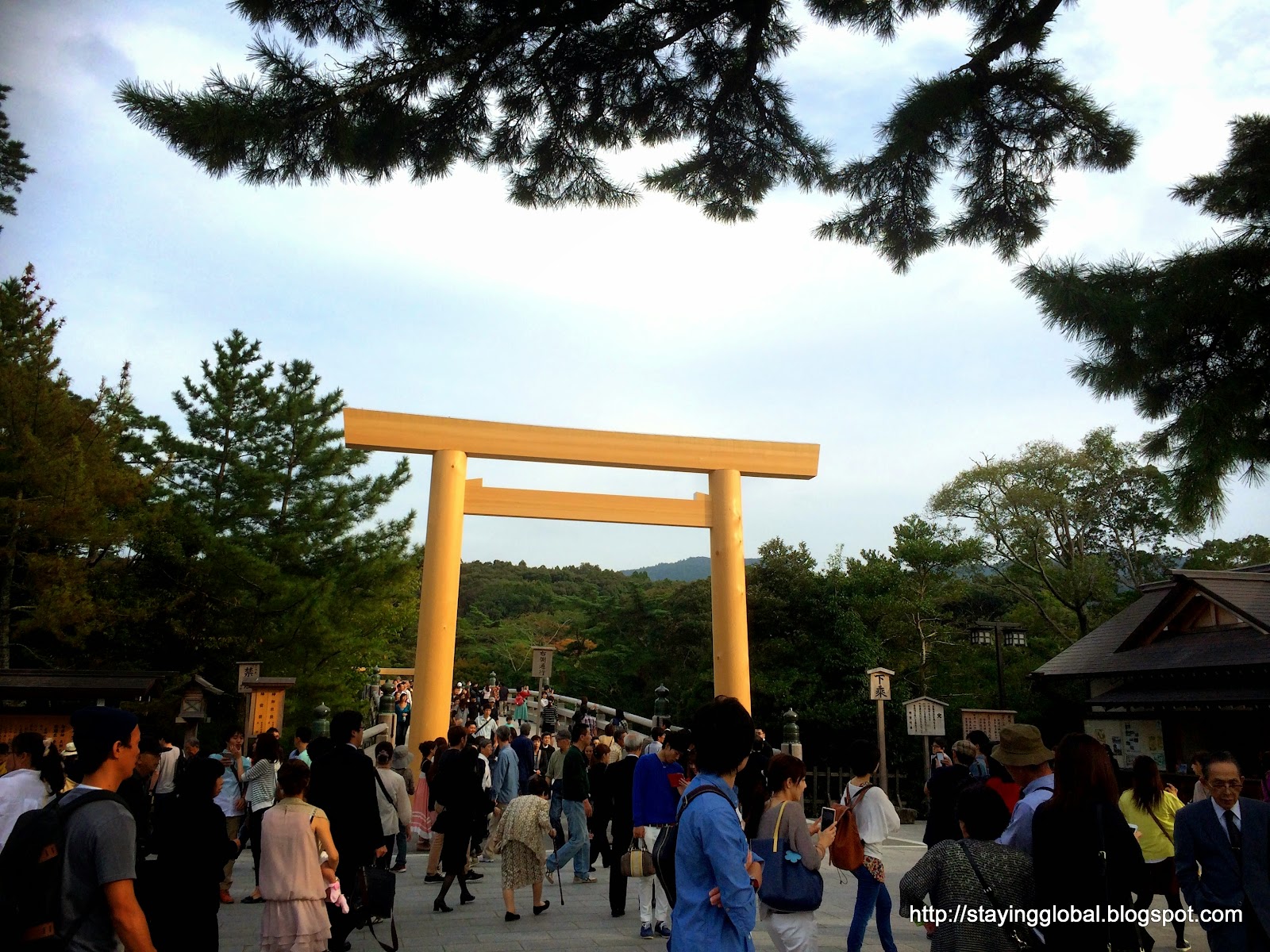 The Torii at the Shrine's entrance is also reconstructed using wood from the old shrines. The site of the old shrine , now called as Kodenchi, is left vacant and is covered with white pebbles. At the time of the next reconstruction, the Kodenchi becomes the site for the new shrine. The 62nd Regular Removal of the Grand Shrine of Ise (the formal translation of Shikinen Sengu) was held in October 2013 and the next will be held in the year 2033. The Shikinen Sengu is considered the largest and most important ceremony performed in Japan.

Visitors have been coming to Ise Jingu since ancient times. 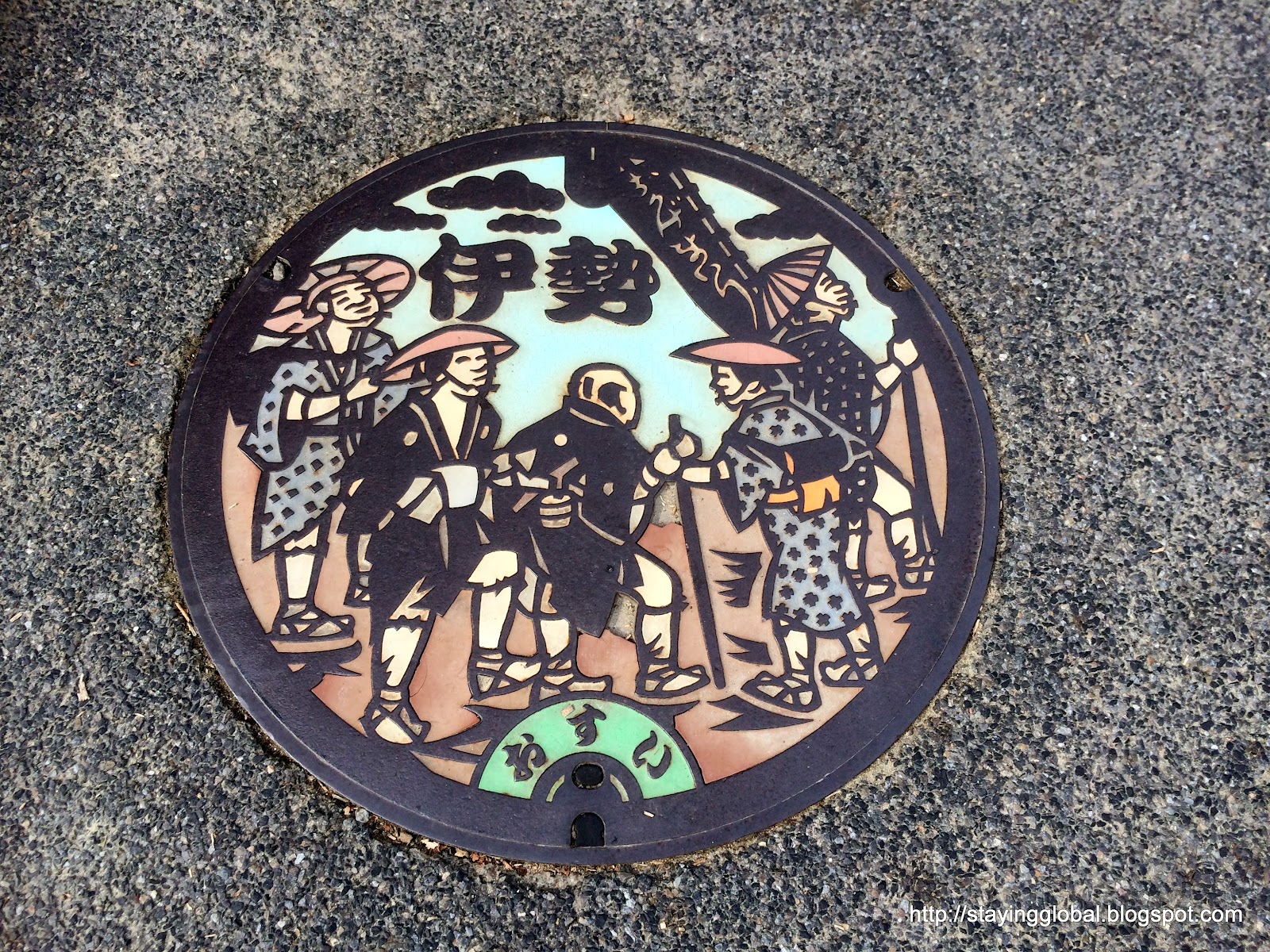 The manhole cover in Ise features pilgrims to the Shrine, apparently from the Edo period.